The Tarot has been used over the centuries to divine the future and discover hidden truths. It is a 78 mystical card deck that is made up of the Major Arcana and the Minor Arcana, which basically means “big secrets” and “little secrets,” respectively.  The mystery behind where tarot originated still remains. And much like many other mysteries of the world  historians, writers and practicing occultists invented various historical roots colored by their own personal views as to how it all began.

One idea comes from the eighteenth-century French occultist and freemason, Antoine Court de Gebelin. He claimed that the 22 Major Arcana cards was an ancient Egyptian book, or a set of tablets of mystical wisdom, called The Book of Thoth. Thoth was the Egyptian god of mysteries and magic, said to be one of the early Kings and the inventor of the hieroglyphic system. Thoth is also believed to be where the origin of the word “tarot” came from, yet this too remains unclear.  Gebelin believed these mysterious tablets were brought to Europe in early medieval time and were subsequently hidden away or lost.

Regardless of how the Tarot actually came to be, it is still believed to be one of the most effective divination tools used today.  British Occultist, Aleister Crowley, believed the tarot was an intelligence, a LIVING force, and a key to the archetypal world within the self. Today the tarot has become more than just a divination tool. it is a deep and comprehensive voyage of self discovery, a mysterious and ancient symbol of all that we are.

Readings can be done with a specific question in mind in general, love, wealth, family, future and blockage or issues pertaining to the question. Readings can be done with a single card to answer yes/no questions and also to represent the card of the day, card of the week, card of the month, and card of the year.  There are also more complex patterns that can depict a wider range of messages and answers that have more than one card. A common example of this is the celtic cross. The celtic cross is traditionally a ten card spread. Another common spread is the three card spread which depicts past, present and future. General readings can be done if there is not a specific question in mind. 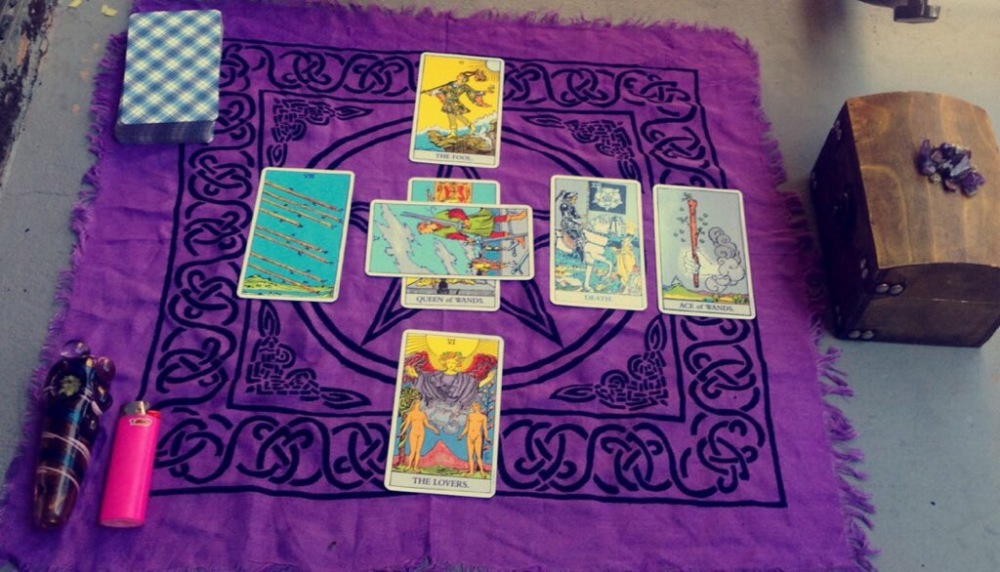 The Rider Tarot Deck in a Celtic Cross layout variation.